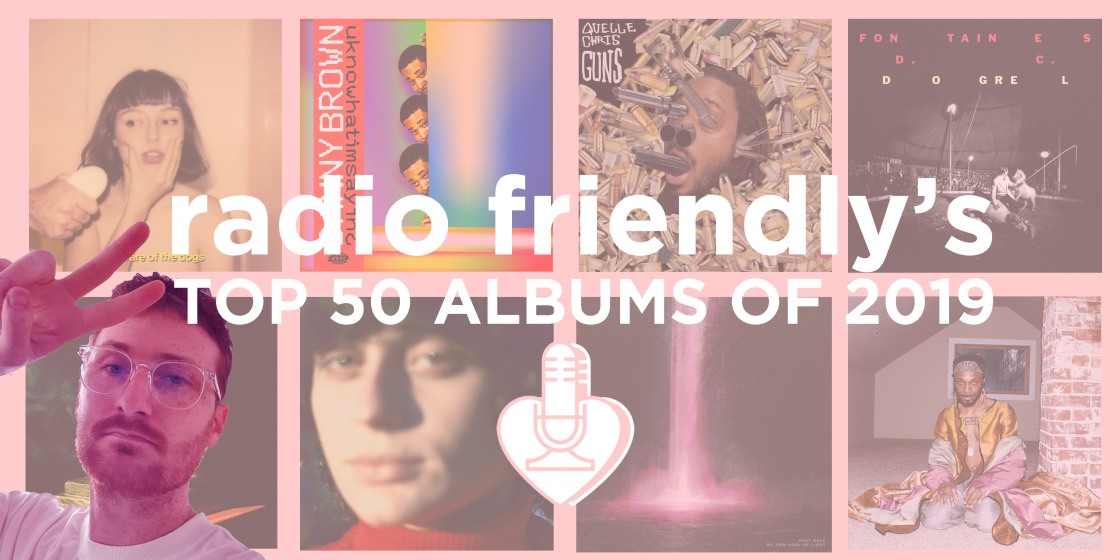 These are my favourite albums of the year.  But there’s got to be a better way to go about this.  A better way to talk about my top fifty albums of twenty-nineteen.  The other day I wrote a list article for my top fifty singles of the year, averaging about one-hundred words per song – you do the maths.  It took a long time, and I don’t want to give you, dear reader, what you could possibly get at Pitchfork or Triple J or wherever else you get your flowery opinions on today’s top hits.  You’ve come to Radio Friendly, there’s a level of polish that I try to at least hold myself to that should differentiate my dribble from those mentioned earlier.  So, let’s try to hash this one out a bit differently.  Introducing, Radio Friendly’s Top 50 Albums of 2019.  Or at least, Radio Friendly talks about a handful of his favourite albums and then lists the rest for your enjoyment.

The year started out with me retracing my steps back into 2018 and sitting down with two of last year’s best albums that I unfortunately, and stupidly, slept on.  I’m talking about U.S. Girls’ In A Poem Unlimited and Soccer Mommy’s Clean.  I won’t discuss much about these albums, because this is an article about 2019 goddamn it, but I do think they deserve a mention.  These albums are fantastic and helped kick off the year.

Stella Donnelly and Solange helped me shift my focus away from the 2018 albums that I was kicking myself I had missed.  Donnelly’s Beware of the Dogs and Solange’s When I Get Home were released in March, respectively.  Both projects are intimate swan songs showcasing the two artists’ incredible talent.  Donnelly’s socially conscious indie pop songs mix elements of classic folk storytelling with irresistible charm.  In it’s darkest moments, Beware of the Dogs is still a captivating selection of tracks.  Solange’s When I Get Home is more subdue, it’s not racing from track to track.  Instead, Solange tackles her blend of R&B and hip-hop with a maturity unseen in her previous work.  I said in my review earlier in the year that no longer shall Solange be Beyonce’s sister first and an artist second.  She is a truly outstanding songwriter and musician, and When I Get Home illustrates that perfectly.

Australian music still played a heavy influence in my weekly rotation of songs, though my tastes branched to uncharted territories with Ana Frango Eletrico’s Brazilian jazz record Little Electric Chicken Heart.  The album feels foreign to the ears for 2019, not purely because of the language barrier, but because it feels as if it was recorded live on tape in the 70s.  It has an authentically pure tone to the record, which is one of its many charms.  Check this one out.

But in terms of Australian music, King Gizzard and the Lizard Wizard features twice on my best of list.  Their two 2019 releases, Fishing For Fishes and Infest the Rats Nest, were a welcome return to form for the ever-evolving-genre group.  While I liked their first release, Rats Nest was a much more consistent, deliberate record as they challenged slash-metal greats to deliver a surprisingly good thrash record.  Sunbeam Sound Machine’s Goodness Gracious was another highlight.  Nick Sowersby, the mastermind behind Sunbeam, showcases what a good one-man-band can sound like.  Layered guitars, ambiently psychedelic keys and blissful melodies are some of the elements that make Goodness Gracious a charming record that deserves more attention.  Local band Dumb Things also delivered a fantastic sophomore album – read my review here – which reinvented the atypical Australian sound we’ve come to love for those blistering summer days.  Tropical Fuck Storm and Holy Holy were other local highlights to 2019, the latter being a much more listenable experience for the average music-goer.  In saying that, TFS’s ability to create dissonant and brash melodies and simultaneously still make them captivating is a credit to their musicianship.  And while I don’t think My Own Pool of Light is the best Holy Holy record, it does show the duo continuing to grow and experiment with their sound as they take a more electric approach to their song writing.  Flight and Hatswing are the best songs on the record, and some of the best tracks they’ve made since their EP.  Also, their live shows are getting better too, putting on one of the best live sets I saw all year.

Hip-hop features heavy in my top fifty albums list.  Billy Woods and Quelle Chris continue to push the envelope for abstract, underground hip-hop; Guns being one of Quelle Chris’ most listenable and commercially viable records to date.  Which isn’t a dig at the music, I just think he’s matured enough to mesh both underground and commercial into his music.  Clipping’s noisy but socially succinct There Existed An Addiction To Blood was a bit of a mindfuck, but held one of the best rap singles of 2019: Blood of the Fang. Meanwhile Danny Brown’s understated uknowhatimsaying? showcased fantastic production and direction from Q-Tip, whilst featuring some of Brown’s funniest lyrics to date, Combat being the apex of album.  2019 also saw Freddie Gibbs and Madlib team up again on Bandana, creating a semi-sequel to their 2014 album Piñata.  Pinata will still be a classic, and at first, I liked it more than Bandana.  But as time has moved on, I flippin love Bandana.  It shows Gibbs at the height of his game, switching his flow to match the incredible beat switches Madlib delivers.  It’s an excellent mix of 70s soul and classic hip-hop, with a bit of new-skool thrown in there on the excellently meta Half Manne Half Cocaine.  JPEGMAFIA sits at number two on my list with All My Heroes Are Cornballs, his follow up to his critically acclaimed 2018 album Veteran.  On Veteran, Peggy showcased his brash and violent production techniques, aggressively spitting over glitchy and chopped up beats.  On Cornballs, Peggy shows a moderate amount of restraint as he moves from brutal yells to autotuned croons in a matter of seconds.  His choppy production is still on show, but seems more deliberate in its composition, especially on tracks such as Keenan vs Kel and Beta Male Strategies.  Peggy shows a softer side, at times a more depressing side, to his multi-faceted persona.  And let’s not forget the incredibly fragile Free the Frail in the last half of the record.  Peggy is vulnerable in not only his production, but in his lyrics, and it’s incredible.

And that brings us to my number one album of 2019.  It won’t come as a shock to those who hang around me.  It’s Tyler, the Creator’s IGOR.  I love this album.  In my half-yearly review, I had this as my number one album of the year so far.  And in that mini-review I said that this album is tethered in my memory to my wedding earlier in May.  The album came out the day before, and I had it on repeat the morning of as I was getting ready and having a couple scotches with my best pals.  But tying IGOR to an important memory – by tying it to nostalgia – does not do IGOR the justice it’s due.  The album is not only incredibly produced, but it’s wonderfully structured and composed by Tyler.  The opening moments of IGOR’S THEME set the stage as if opening for a tragic stage play.  Hollow, thickly distorted keys drone for what seems like too long, before breakbeat drums kick in.  It’s mostly an instrumental, introducing us to the character that will take us throughout the next eleven tracks.  EARFQUAKE is a heartfelt plea to a lover who’s foot is already out the door, as Tyler wails, ‘don’t leave, it’s my fault.’  We don’t have time to breathe before the ‘four, four, four’ count introduces the next track I THINK, arguably the best song on the album.  Solange aids in the refrain, ‘I think I’ve fallen in love, I think it’s for real,’ before Tyler questions to himself, ‘how can I tell you?’.  It’s in I THINK that Tyler cleverly crafts the narrative of his love story, saying ‘I’m your puppet, you are Jim Henson,’ foreshadowing the track PUPPET to come later in the album.  On I THINK, Tyler proclaims his new-found emotions as if he’s the main character in a Shakespeare sonnet.  I think I’ve fallen in love.  I think it’s for real.  In contrast, on PUPPET, Tyler reflects on his relationship, wanting to go back to being the puppet, wanting to go back to the time to when he was happy.  He pleads, ‘what do you need? Do you need this’ before crooning, ‘I’m your puppet, you control me.’  It’s beautifully heartbreaking.  IGOR is a masterclass in storytelling, and as a concept album, Tyler has crafted a narrative that begs to be retold with each listen.  Not only that, but IGOR is expertly produced, fusing genre elements together in a cohesive package.  It shows maturity in an artist who once said, “I’ll crash that fucking airplane that that faggot n**** B.o.B is in and stab Bruno Mars in his goddamn oesophagus and won’t stop until the cops come in.”  Not only is IGOR my favourite album of 2019, but it’s the only album in recent memory that I could wholeheartedly give a ten out of ten.  I don’t score albums on a number scale, but I tell ya, if I did, that’d be it.

2019 has been a solid year for music.  And I could go on for another one-thousand words, maybe two, but we all know no one has the attention span to read that shit these days.  In closing, thanks for reading thus far, and thanks for keeping up with Radio Friendly in 2019.  It’s been a slower year than last, content wise, but I feel as if the writing has still been of a semi-decent quality.  I’ll probably do another Year inReview like I did last year.  Look out for that.  And for all those who are interested in my whole list, it’s just down below.  Scroll down and enjoy.