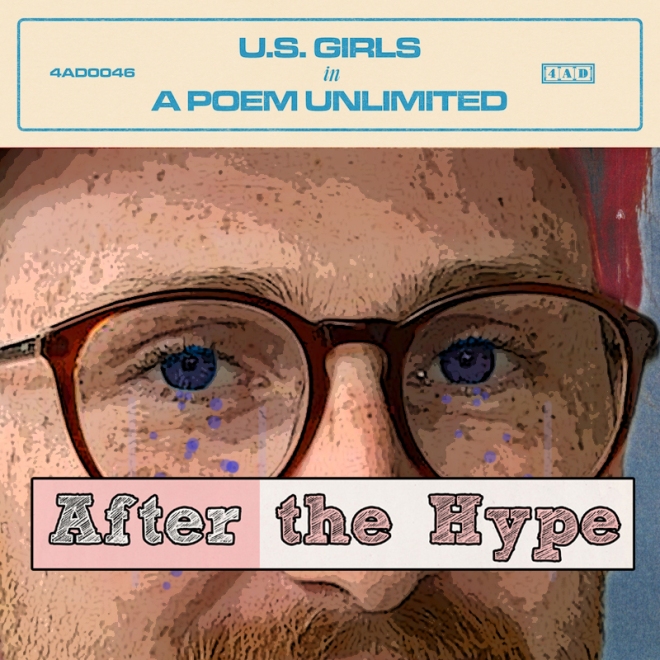 AFTER THE HYPE – U.S. Girls’ In A Poem Unlimited

AFTER THE HYPE is back for 2019!  For those who are unfamiliar, After the Hype is a series where I listen to an album, after the hype dies down, and see whether it was worth all the hullabaloo.  This week’s album is U.S. Girls’ In a Poem Unlimited.

U.S. Girls’ album In A Poem Unlimited was released in February of 2018.  U.S. Girls’ consists solely of American musician Meghan Remy.  And Remy’s side project achieved great praise from critics around the world last year, awarded many accolades in many publications’ end of year lists.  But not mine.  Not for Radio Friendly.  I listened to the album when it came out and moved on.  Let that bad boy sit in the back catalogue of my Spotify library.  I never deleted it though.  I never threw it away.  I knew I’d return to it like the week-old left overs at the back of the fridge that you know is probably not a good idea to ingest into your half-drunk stomach.  The only difference here is that In A Poem Unlimited won’t leave you cradling the porcelain bowl like you’re holding the immaculate conception.  The album won’t leave you wiping minced bile from your mouth in your most vulnerable state.  In fact, In A Poem Unlimited will do the exact opposite.

Remy’s velvety smooth vocals harken back to the ‘good old days’ of pop music, her vocal demeanour resembling that of early Kylie Minogue, ABBA, hell even Lady Gaga to an extent.  I get an aura of Kylie Minogue on opening track Velvet 4 Sale.  But, instead of a glistening synth backdrop, Remy is backed by psychedelic fuzzy guitar riffs, accompanying her slightly modulated vocal effect. Remy’s voice is soulful and sexy, yet poetically fragile.  It’s a performance that ties in with the lyrics of Velvet 4 Sale, depicting a woman dealing with the trauma and horror of domestic abuse.

“You’ve been sleeping with one eye open, cause he always could come back ya know? And you’ve been walking these streets unguarded, waiting for any man to explode.”

The chorus tries to affirm power to the character at the centre of the story.

“It’s all just friction, but don’t forget the revenge. Act like you got some velvet for sale, then you destroy their hope for deliverance. Don’t offer no reason, instil in them the fear that comes with being prey.”

And that’s just the opening track.

Instrumentally, In A Poem Unlimited goes from strength to strength.  Rage of Plastics’ clever use of powerful, screeching horns against its ‘blues-like’ chord progression and it’s use of, once again, fuzzed out, psychedelic guitar riffs is fantastic.  This time, Remy’s poetic story depicts a relationship between an infertile woman and her partner.  Her cryptically poetic lyrics beg for repetitive listens.  And once the story becomes clear, the song is elevated further.

Fifth track, Rosebud, sees Remy swap the psychedelic riffs for a low-fi synth and a minimal hip-hop-esque beat.  Her vocals once again take the form of yesteryear’s pop divas, melding a generational gap that I’ve never heard produced this well.  Further track L-Over once again reinforces Remy’s lyrical prowess as she details a sexual encounter gone estray, and the protagonist repeatedly telling her ex-lover that it’s over.  The bridge of the song literally spelling it out for the ex-lover:

Pearly Gates, one of the lead singles from the album, isn’t the most exciting track on the album.  It’s hip hop beat is creative and R&B spin on her melody fits well, it’s just not the most captivating song.  Especially when it sits amongst greats such as L-Over and Rage of Plastics and Velvet 4 Sale. And closing song Time.  Driving drum beats, rolling percussion and a standout guitar riff accompany Remy’s repeated refrain, “When there’s nothing, there is still time.”  The percussive slaps accent the off beat of the drums, it’s an infectious cacophony as a saxophone soars in.  Time is like an ode to Born Under Punches by Talking Heads. The perfect closer to In A Poem Unlimited.  As if all the emotions, all the anger and frustration seeping from the lyrics has built to this moment.  And Remy and Co explode.

U.S. Girls’ use of classic pop traits from 80s and 90s sets up the expectation that each song is just a rehashed, nostalgic look at where pop’s legacy. The classic songs of love and lust, dancefloor anthems of sex and desire.  But Remy and her accompanying band flip expectations, and in such, classic pop tropes.  Her stories deal with the plight of the modern woman.  Often the unfortunate plight of abuse, whether it’s physical or mental, against the backdrop of carefully and wonderfully written pop songs.  It’s nostalgic, yet powerfully modern.

In A Poem Unlimited by U.S. Girls is worth the hype.