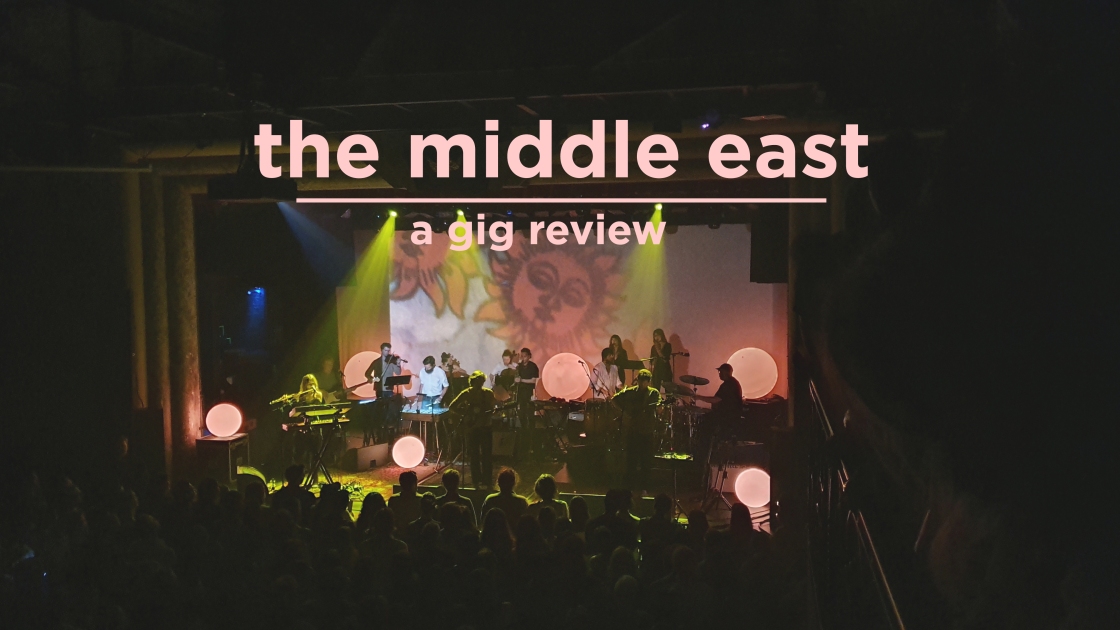 I can’t remember the first time I heard The Middle East.  But I retell the story many times, like the retelling of a fantastical urban legend, a magical setting amidst a beautifully haunting soundtrack.  Was it at the going down of the sun at the age of sixteen when I was driving down the highway; driving away from my prepubescent problems as the glistening glockenspiels played?  Or was it alone in my room flicking through the tracks of the latest Hottest 100 CD as I tried to hide away from whatever insignificantly unimportant teenage angst boiled inside me?  There’s a youthful romance to my infatuation with this band.  They are rooted in a blissfully innocent period of my life, yet their harrowingly beautiful music often conjures the opposite.  There’s darkness in The Middle East’s music, and heartbreak, and wonder.  But most importantly, beauty.  And that has what has driven me to return time and time again to their little discography.  The Middle East famously announced their breakup on the stage of their 2011 Splendour in the Grass set, only months before I was old enough to see them live.  And since then the hope, nay the fantasy, of seeing The Middle East live faded into a dream.  Until tonight.

I cling onto the railings that circle the mezzanine of The Tivoli.  People shuffle in front to try and cement their view of the stage, footsteps hurry on the ground floor as the lights begin to dim.  Local musician BANFF, the solo music project of song-writer Ben Forbes, takes the stage.  He holds an electric guitar in hand.  He begins to sing.  The falsetto melodies encompass The Tivoli, resulting in a sudden hush from the crowd.  A slight echo on his vocals and guitar add some depth to his minimal performance.  His single The Great Unknown makes an early appearance in his opening set, a slower, folkier version of his indie-folk tune.  BANFF also treats the audience to a cover of Roscoe by Midlake.  His harrowing and strong falsetto continues to impress, though there’s only so much of a down-tempo crooning solo artist I can take, especially as I wait for one of my favourite bands.  And from the murmurs from the crowd, they are in the same boat too.

The crowd at the Tivoli shuffle to the front after a brief intermission.  The lights begin to dim again, and I lean over the railings to see past the tall latecomer who decided to squeeze in front of my friends and me.  The ground floor wiggles back and forth like a group of ants devouring a carcass.  Many just want a view of the band we’ve waited years to see.

Lead singer Jordan Ireland leads the pack as The Middle East take the stage.  The stage fills as musicians take their spot, Ireland stands centre stage with his twelve-string-acoustic, a small string section of violinists and cello players stand behind one shoulder, a banjo player and backing harmonists to his other.  Backing lead vocalists and instrumentalists, Bree Tranter and Rohin Jones, stand either side of Ireland.  The band begin to play, the lights illuminating the band on stage, yet Ireland evades and stands in darkness.  The gentle finger picking of the guitar rings throughout the Tivoli as the band start Black Death 1349, the opening track to their 2011 album I Want That You Are Always Happy.  Ireland sings, his delicate murmur backed by lush vocal harmonies.  The harmonies ebb and flow, the music swelling as the entire band find a space where they can enter organically.   There’s a swinging groove to this rendition, different to the subtle and mellow version on the album.  A wave of emotion washes over me, the hairs rise on my arms and chills move through my body.

The band transition elegantly from song to song, moving from upbeat singalongs like Jesus Came to My Birthday Party and Land of the Bloody Unknown to more subtle and gentler tunes like Very Many and The Darkest Side.  It’s hard to hear Ireland’s guitar in the latter though.  He uses a heavy echo on his twelve-string, and it sounds as if it’s only coming through his foldback.  It’s evident especially on The Darkest Side where majority of the song features his fast fingerpicking.  A slight disappointment, one that I don’t think is entirely Ireland’s fault.  Many of the tracks the band play share common tropes to their studio versions, though have been arranged almost entirely different for their live set, whether it’s in a different key, or structured entirely different.  It’s a testament to their talent to showcase their discography in an almost completely different way.  The band may have lay dormant to our ears for close to a decade, though it’s obvious they have been rehearsing and re-tooling old songs in preparation.

The Middle East move from Dan’s Silverleaf into a brief interlude instrumentation.  I’m in awe of the musicianship of The Middle East as many members swap instruments and move about on stage to fulfil different roles.  Another wave of chills rush through me as I listen to the live instrumentation.  Ireland begins to mumble his falsetto into the mic, and though it doesn’t sound like the tune, he begins to sing the lyrics to Blood.  The faint chime of the glockenspiel rings in the background, and it’s evident that this isn’t the Blood that made The Middle East an overnight world-wide success.  And in a way, I wouldn’t expect anything different from the band who broke up over their own commercial success.  The Middle East play and the crowd watches in awe.  We cannot sing along because we do not know where this version will go.  And it’s beautiful and for a brief moment in the night I cry.

Jones takes the mic and begins Deep Water.  His acoustic guitar loud yet effortlessly quiet.  He strums delicately and in his own time.  He whispers the lyrics into the mic and no one utters a sound.  The Tivoli is quiet aside from the gentle brushes against the steel strings.  Light snare scratches add some depth to the track before the backing vocalists add their rich harmonies.  Flutters of banjo strings can be heard in the background, but I close my eyes and listen as The Middle East create a tapestry of atmospheric sounds.  And no one utters a sound. This is a band unlike any I’ve seen live; a treasure to Australian music.

The fantastical memories of my years listening to The Middle East still hold strong in my mind.  Any early apprehension of their live set potentially tarnishing my love for them washed away in the early moments of their set.  And it stayed like that until the final breaths of Deep Water.  Their live set did not detract from their studio discography, if anything it stands along as a separate beast; showing true musicianship in rehashing their own songs.  This gig adds onto The Middle East mythos that continues to live strong in my mind. And I’m thankful for that.

This is a review of The Middle East’s gig at The Tivoli in Brisbane on September 13, 2019.