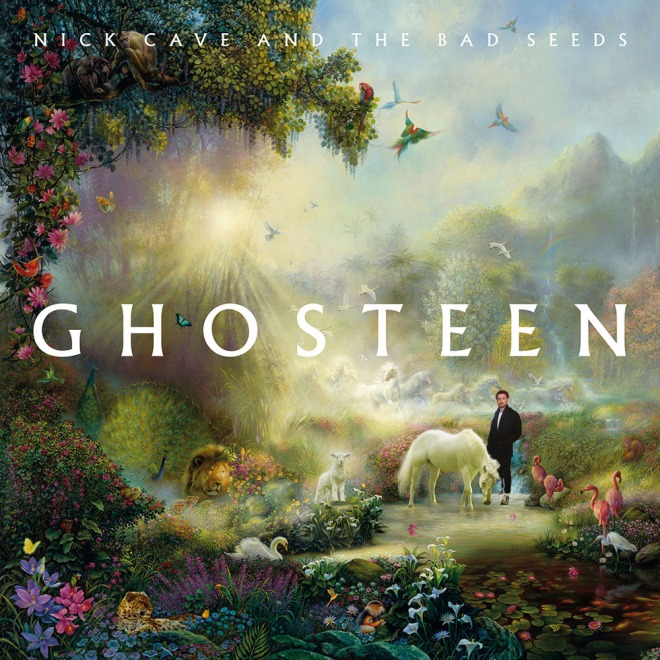 First Impressions of Ghosteen by Nick Cave and the Bad Seeds

I really fucking hate being the writer that wants to break the story first, especially when it comes to music because the internet is littered with shit writing for the sake of getting it out before the competition.  But this morning I felt the urge to write as I laid in bed, my phone next to my ear as I listened to the new Nick Cave and the Bad Seed’s record.  Please keep in mind, these are just first impressions, not a full review.  The album was a long one, so I had plenty of time to contemplate my thoughts.

I listened to the global premiere of Ghosteen this morning on YouTube.  It’s not available on Spotify yet, I think Australia needs to wait another day.  But I’ve got some thoughts.  Firstly, the comments on the YouTube premiere were fucking weird.  Nick Cave fans really like to tell everyone, in poetic detail, of the tears falling down their face while listening to the album.  In fairness, it is a sad album.  Ghosteen follows the similar instrumental pallet that The Bad Seeds provided on Skeleton Tree.  Lyrically, it sounds as if Nick Cave is still dealing with the grief of his son.  But where Skeleton Tree was an immediate reaction to grief, Ghosteen almost seems like he’s trying to move on and part ways with the grief he’s held onto for years.  That’s just a hunch.  Cave also deals with many animalistic metaphors, some that I don’t fully understand yet after the first listen.  He mentions horses many times; horses in the forest, horses burning on fire, him riding horses burning on fire.  It’s still a very bleak and minimalistic album like Skeleton Tree.  And while I liked that album, it’s not my favourite metamorphosis of Nick Cave and the Bad Seeds.  Especially after the near perfect run of albums with Dig Lazarus Dig and Push the Sky Away.  I wanted just a little bit of guitar work, or violin, or percussion, or the Bad Seeds to enter with a full backing band.  Instead ominous synths and cathedral-like organs hold chords while Cave fiddles around on the piano.  It’s depressing, probably more depressing than Skeleton Tree, and I don’t know what mood I’d have to be in to throw this one on.  The last leg of the album is certainly much better than the start.  Or at least more dynamic.  My favourite songs off the first listen were Night Raid, Leviathan, Ghosteen and Hollywood.

Cave closes the album with a heartfelt preach, “I’m just waiting for peace to come.”  And I hope it does.  For the sake of Cave’s sanity and for the sake of his band.  This isn’t a bad album, it’s just not a good Nick Cave and the Bad Seeds album.